With this whole COVID-19 thing going on the economy is in shambles, flights are at a near all-time low.

But, for my purposes, that means that the normally super-busy airports like Cleveland are now nearly devoid of activity.

Took an afternoon with my friend Alex to go flying and see if we could get into the airport. Turns out, they practically invited us in. There was no traffic happening. First time putting wheels down in an airport that large.

Took an aerobatic flight at Red Stewart Airfield near Cincinnati. Spent too much time having fun rather than recording the flight, but here’s one loop. 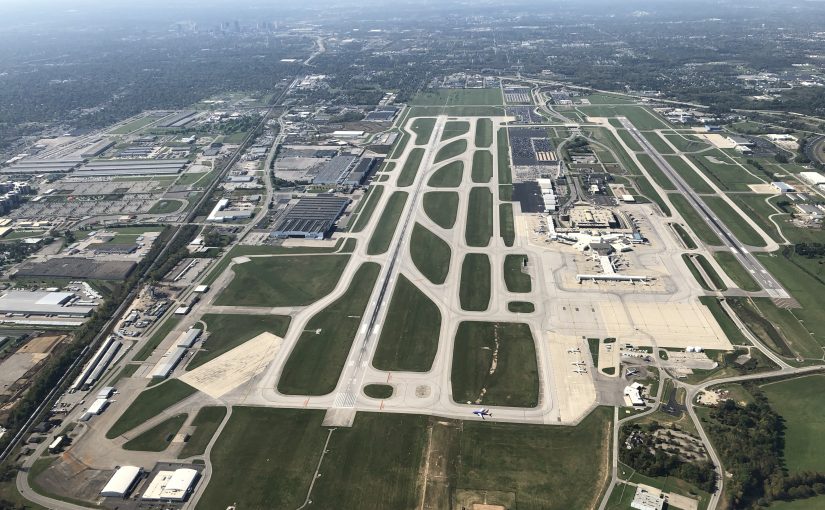 Took my friend Mike up for a sight-seeing tour around Columbus. Got the usual shots of the Horseshoe and a circuit around downtown, but on our way out we did a fly-by of John Glenn International Airport (KCMH) and I got one of my better pictures of the airport.

It was slow, so I should have asked for a touch-and-go, but we were pre-occupied with other sight seeing so we skipped that option. 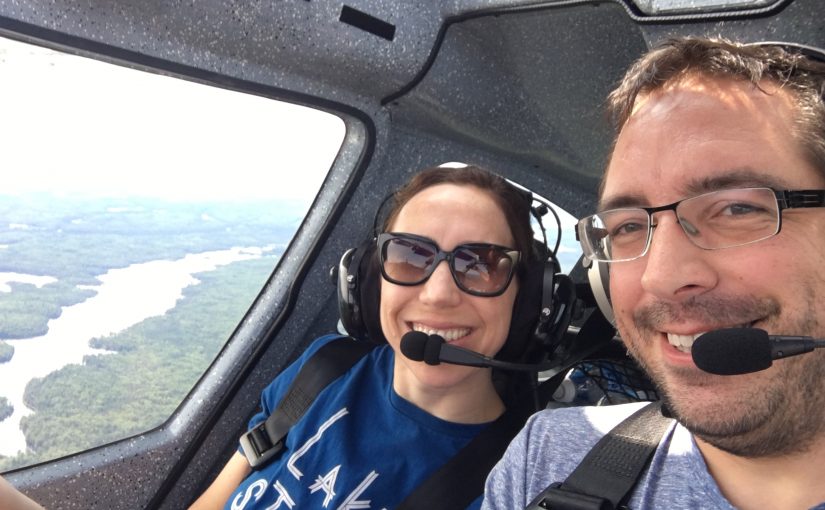 My wife’s family has a cabin on a lake very near the boundary waters just outside of Ely, Minnesota.

Ely, Minnesota is a wonderful place. One of the primary egress and ingress points for the Boundary Water Canoe Area. It’s also got that friendly Minnesota small-town feel but due to the enormous amount of tourists and travelers the have an economy and businesses that are similar to a much bigger population. 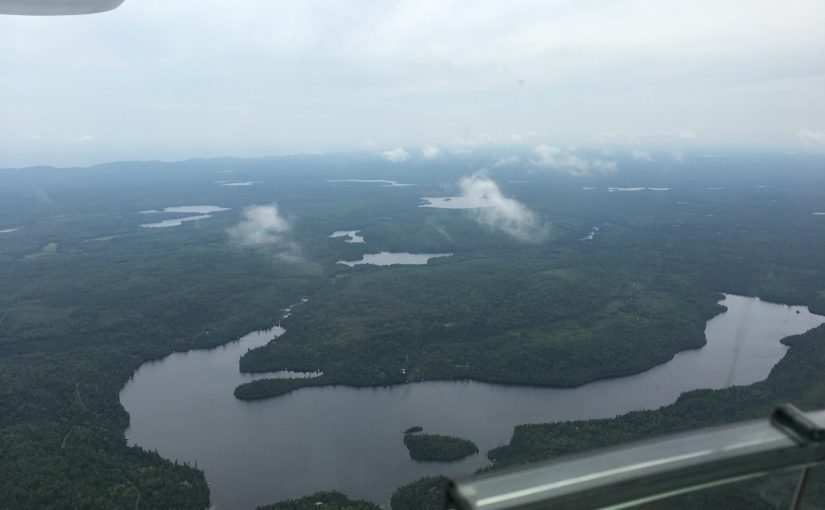 I flew to Ely, Minnesota in August with my friend Jared.

He takes a regular trip with his family into the Boundary Waters (BWCA) and my in-laws have a cabin on a BWCA lake. In order to avoid driving and to get some flying hours in, we took this tiny plane from Columbus, OH to Ely, MN.

We were trying to avoid flying over large bodies of water because when you’re in a single engine airplane, you don’t have a lot of options besides swimming if your engine goes out (ours didn’t).

We meant to get fuel after Chicago but the day we were flying we had 30 (thirty!!!!) knot headwinds even low to the ground. It was stupidly impressive bad luck. So we had to stop in Gary, IN to grab some gas before heading up again.

After grabbing gas, we were off. We saw the Blue Angels parked on the north ramp of the airport as we were taking off but it was too late to grab a picture. Turned out they had a show over the Navy Pier in Chicago a little later in the morning.

We know because we flew through the TFR (before it activated).

Next we flew up towards Duluth. Still staying low because of the ridiculous headwinds, but that meant things were also super bumpy.

Jared puked for the first time ever in a small airplane. I always have a puke bag in the plane for emergencies but never expected to use it with two pilots on board.

So Jared pukes. The turbulence and motion wasn’t getting to me until then, but that puke-bile smell? Oh yeah. I could feel it.

The problem was that I only had one puke bag in the cockpit. If I had to hurl, it was going to be in the same bag Jared used earlier. Gross.

Furthermore, Jared told me point blank that if I hurled, he was going to need the bag back to go again.

Faced with the prospect of sharing a puke-bag and passing it back and forth, we decided to land and take a 45 minute break.

We felt better after taking off (and getting the back-up puke bag from the baggage compartment).

After turning the corner at Duluth, we went along Minnesota’s North Shore to drop Jared off in Grand Marais.

Then finally, with the plane to myself, I flew over the Boundary Waters due west to land in Ely, MN.

Was a fun trip. 9.3 hours in the plane due to the ridiculous headwinds. I was super happy to get a burger on the ground. 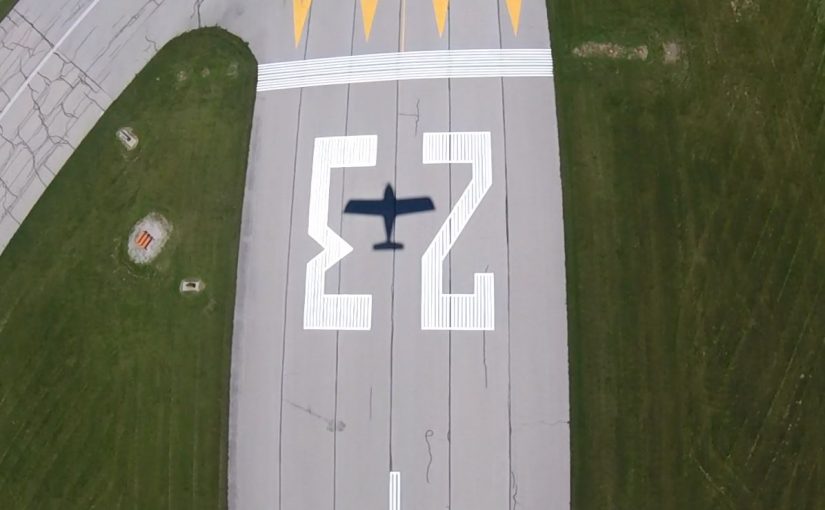 Took the plane up just to see how the picture looks if I point the camera straight down. Turns out it makes for pretty bad shots except for at a few key moments such as above during takeoff.

So here’s a quick shot of take off from a straight-down perspective: 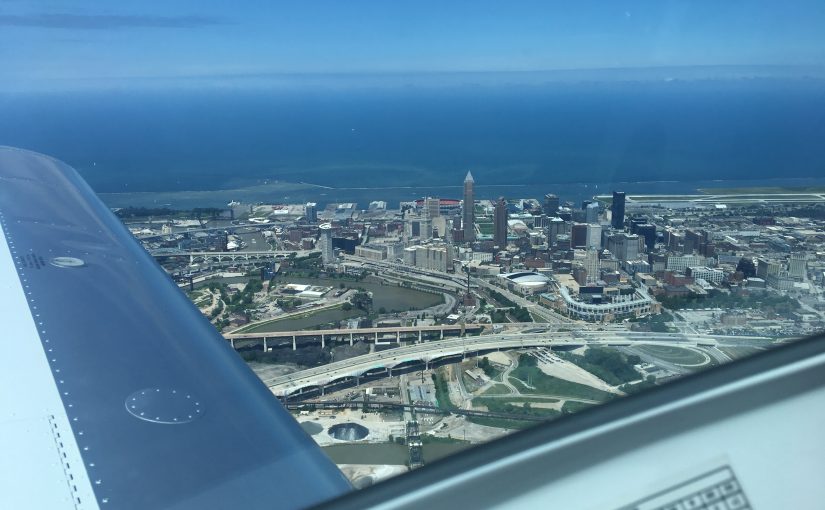 Weather looked great for the weekend of our anniversary so I booked one of my usual planes at the club to take up to Cleveland and back for a local area vacation.

The day before the trip, a student pilot at the club had a very rough landing and did some damage to the plane I had reserved. The student is fine (physically) but the plane is out of commission for probably 1-2 months.

To salvage the trip, I took another plane up with an instructor right away to get familiar with a different airplane and have the club sign me off on being able to rent it, so that’s how I ended up taking a “SportCruiser” up to Cleveland.

So this is Burke-Lakefront, an airport I have wanted to fly to since early in my lessons. It’s a gorgeous airport right on lake Erie and within easy walking distance to downtown Cleveland.

Not to mention, you get a SPECTACULAR view of the Browns stadium if you are doing a standard pattern entry to runways 6R or 6L.

After landing (smoothly this time), we grabbed our bags from the plane and walked about 10 minutes to the downtown Westin.

My wife and I enjoyed our one-night stay in Cleveland. Caught a comedy act at “Hilarities” and had a lake view from the 21st floor of the Westin. Awesome time had by all.

We had great weather on the return trip. Only a slight headwind.

Smooth air all the way back to Columbus until we had to descend below the cloud layer.

Had a great landing back at KOSU (love the way the SportCruiser floats), parked, and headed home. 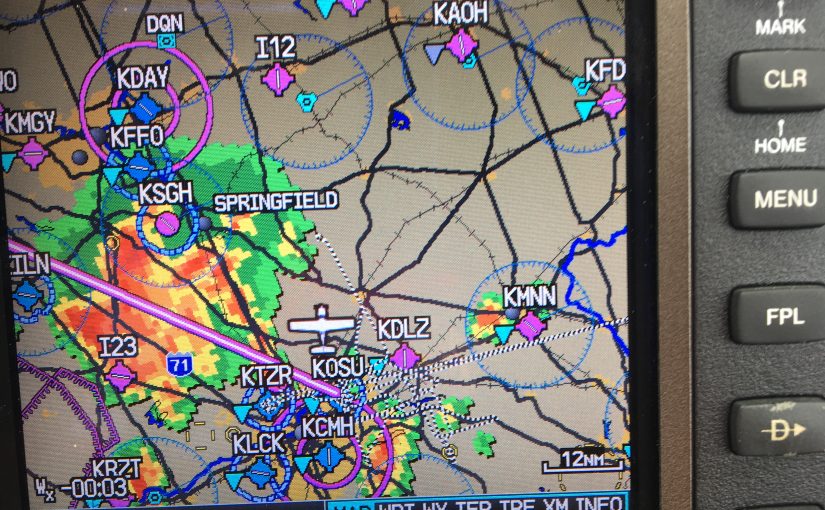 So, as I mention in my “About” page, I am an attorney by profession. Although I am primarily an estate planning attorney (wills, trusts, etc…), periodically I will have to do an eviction while settling an estate. As time went on, I decided that I would pick up evictions on their own, not just in association with closing estates.

At any rate, I had an eviction to file in Hamilton County and decided to fly down if possible. Well, I did, and I got caught dodging thunderstorms. The image at the top shows me going northwest around a thunderstorm before turning south to Cincinnati. That added an extra 45 minutes onto the flight.

Along the way though, we passed a few places we otherwise would not have seen from the air.

Even with the diversion, we made it into Lunken, Cincinnati’s regional airport. It’s quite close to downtown and an Uber ride was just a couple bucks to get me to the court house.

See how nice the skies were when I came in? Gorgeous blue with a few clouds.

Well, they weren’t so nice coming out. I made it out of there about 15 minutes before it was enveloped in thunderstorms which would have blocked me in for another 4-6 hours. Then I had to dodge a few cells to avoid lightning on the way out but otherwise had a pretty direct flight back to Columbus.

Short advertisement: If you need estate planning, give me a call at my office. 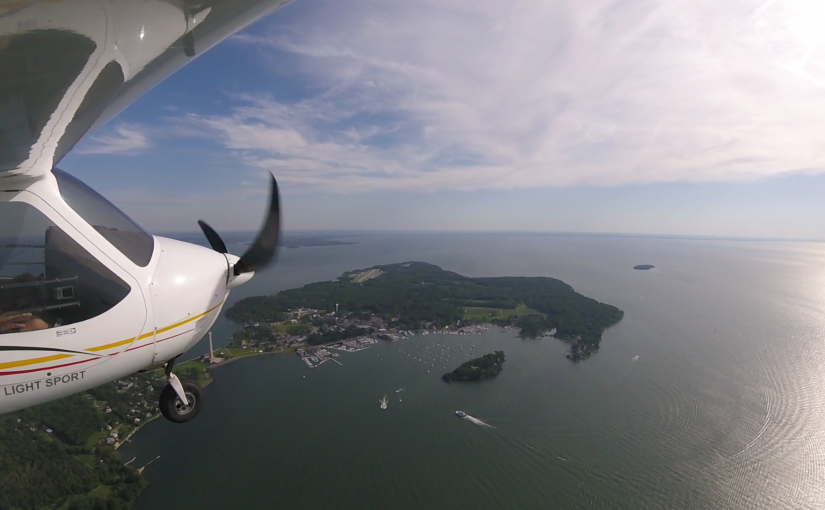 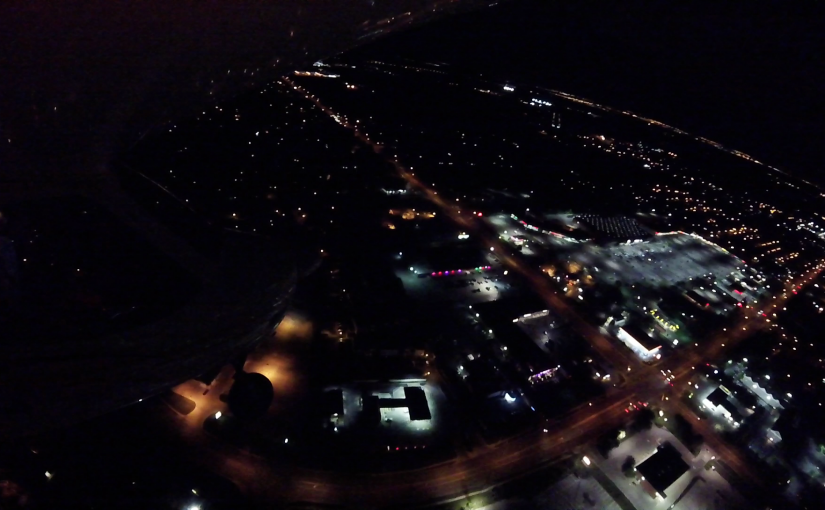 Private pilots are allowed to fly at night with no more restrictions than they have during the day. However, to take passengers up at night, pilots need to be “night current” which means having performed at least three take-offs and full-stop landings within the last 90 days.

I hadn’t done any night flying for a while but I might sometime this summer so I decided to get night current again by taking a short solo flight around the local pattern for a couple stop & go landings.

The thing about night flying is that it’s tough to see stuff in the dark so it’s good to fly at a familiar airport. However, of all things, this particular evening they were using Runway 5 which I have never taken off from nor landed on.

Taking off is no big deal, I know the airport layout pretty well these days. But landing on an unfamiliar runway is a bit eerie even when you know there are no obstacles on your glide path.

It was a good flight, and it’s nice to be night-current again. Maybe a fireworks flight this summer?