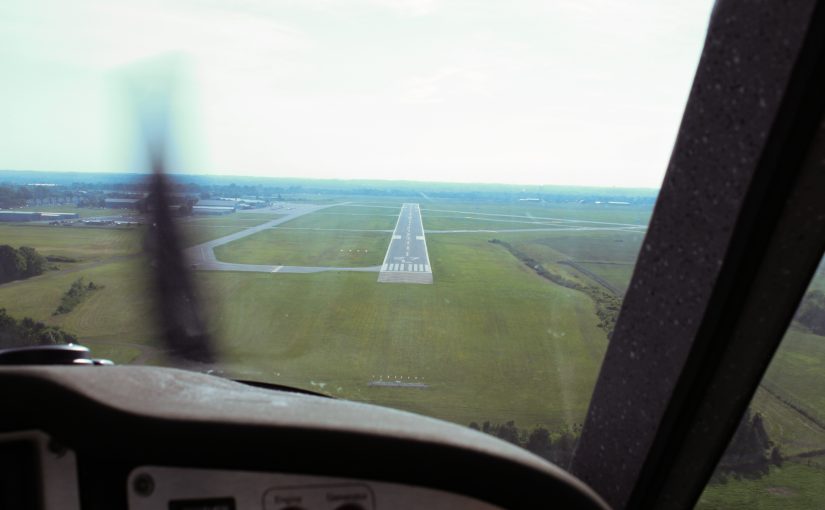 I’ve taken a lap around Columbus a time or two, but my right-seat photographer had only gone up with me previously at night.

Besides being super hot, it was otherwise nice flying weather and a good chance to get some daytime city shots. In addition I was able to grab a few shots of a couple runways as we were on short final.

As always, I took off out of Ohio State (KOSU) and then headed southwest. Not for any particular purpose but because we took off to the west and I wanted to get out of controlled airspace for a bit to grab a few pictures before heading back over campus.

Power boating (wakeboarders, skiiers) to the south (left) of the bridge, rowers to the….well, rowers pretty much go wherever the hell they want to.

After getting clearance from Columbus Approach, I took the plane over campus. We were instructed to stay under 3,000 feet above mean sea level which in that area of town is only a little over 2,000 feet above the ground so we got some decent shots. Here’s a good reprise of a stadium shot I’ve gotten a few times before. Probably the best quality shot to date.

Next move was to head south to swing around the city. Columbus Approach was busy and they were happy to have us move south of the departure lane of old Port Columbus.

Turns out it was the Jazz & Rib Festival and we got a couple shots of the booths set up on the bridge across the river. I should have gone down there this year, looks great in the new location along the river. 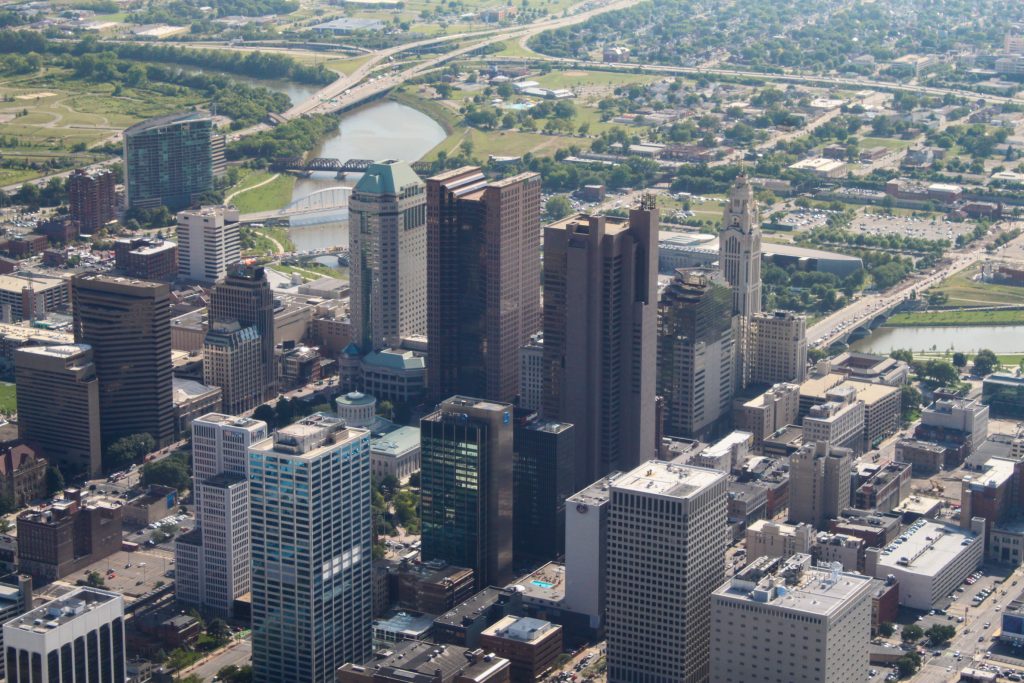 Nice real estate a little west of the city:

Now that the city tour was over, I wanted to head west and do a quick landing. Madison county airport is a familiar place for me from my flight training and I enjoy stopping by from time to time. Not a whole lot of other planes in the pattern but enough to keep the radios lively. We followed one plane in and then bugged out to the north.

After a quick touch & go, we headed northwest and I let my passenger handle the controls for a bit. Before heading back home to Ohio State. Here we are on short final, perfect glide slope.

Looking forward to the next trip. Maybe up to the lake and a pass over a few islands. 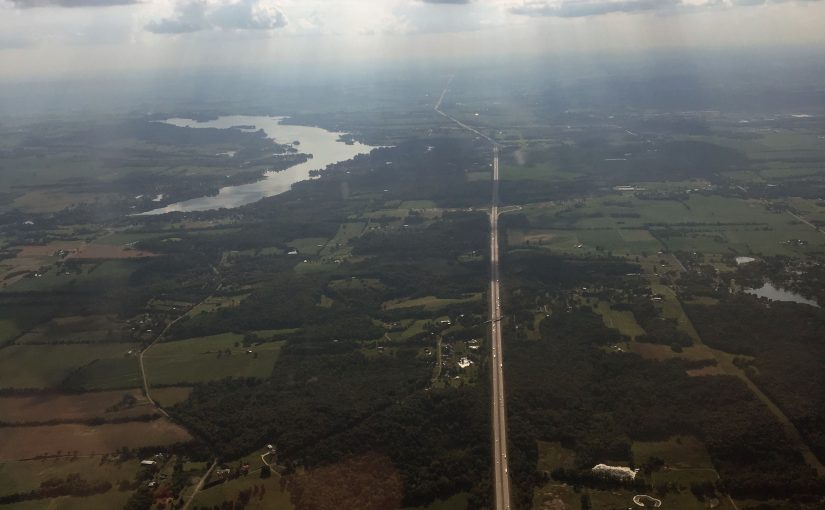 The weather cleared up substantially for the trip back home. Still not ideal, but at least there was plenty of room between the bottom of the clouds and the top of the Appalachians.

Was getting bumped around quite a bit over the peaks as the air got pushed around. It was easy to unintentionally climb or drop 200 feet based on the air movement. When over the valleys, the wind was substantially calmer.

As nice as the Appalachians are, I was happy to be over them and back in Ohio. I learned a lot about marginal VFR flying this trip, and most especially when it is smart to safely divert to a nearby airport when things get sketchy.

Even when not flying, there’s something nice about crossing over the Ohio river. It feels like home, but this is the first time I did it at this altitude and it was a lot of fun.

Traveling northwest, I came across the Muskingum River. There were a couple of small towns along the way. Here’s Beverly and McConnelsville, OH. Both covering both banks of the river.

After passing by the Muskingum, it was finally time to be close to Columbus proper. Being handed off to Columbus Approach at John Glenn Columbus International Airport was nice except for the fact that they were extremely busy at the time. No niceties from Air Traffic Control today. They vectored me around the major traffic areas but set me up for this shot. Probably around 5:30pm at this point.

I did get a proper welcome at OSU’s airport where the club was eagerly watching for my return.

So there I was stuck in Elkins, West Virginia waiting on clouds to give me some space over the mountains. There was another couple stuck there too that had actually been stuck since the previous night trying to head south west to Texas.

After a few hours of deliberation and pointing out holes in the clouds that might mean they’re breaking up, just to see the hole close again, the other couple and I decided to call it a day and try again the next day.

I booked a hotel room and had the shuttle come pick me up. As we drove to the hotel, the sky kept looking better and better. I was starting to kick myself for booking a hotel — buuuuut — I wanted to be safe. So I got to the hotel, got a shower, got into clean clothes and prepared to head to the local Applebee’s to have a beer and call it a night.

The clouds looked better and better so I decided to call the national weather briefing service for one last chance. They showed that I was looking okay currently and had about a 2-4 hour window to get over the peaks before the clouds came back down and shut me out until noon the next day.

I had a quick self-conversation. Was I succumbing to “get-there-itis” or was this a legitimate opening? At that moment, the beer sounded a lot better than getting back into the hot & sweaty plane and I decided to turn back if the clouds were close to the peaks.

So, I hopped back in the plane and took a peek at the peaks.

Things looked good. Got over the mountains and it was clear sailing into Hanover County, Virginia where I was able to pick up my old college buddy Matt.

We flew from the Richmond area to the Williamsburg airport just so that we could take a look at some of the many Virginia rivers from the air. Then it was due west to Blacksburg.

This is Spring Hollow Reservoir just outside of Roanoke and Blacksburg. Really cool looking lake at such a high altitude. There’s something gorgeous about mountain lakes, even if they are mostly man-made with a dam.

We had to cut below relatively low cloud cover again passing over one last peak to get into Blacksburg, but when we made it to campus, it was well worth it.

This is what we came for. Finally! Matt’s cousin picked us up from the airport and we went to have some fun at the local bars. By the way, the best place to go in Blacksburg, VA is the Hokie House. Tune in for the trip home in part 3, and take a look at this shot of Lane Stadium! 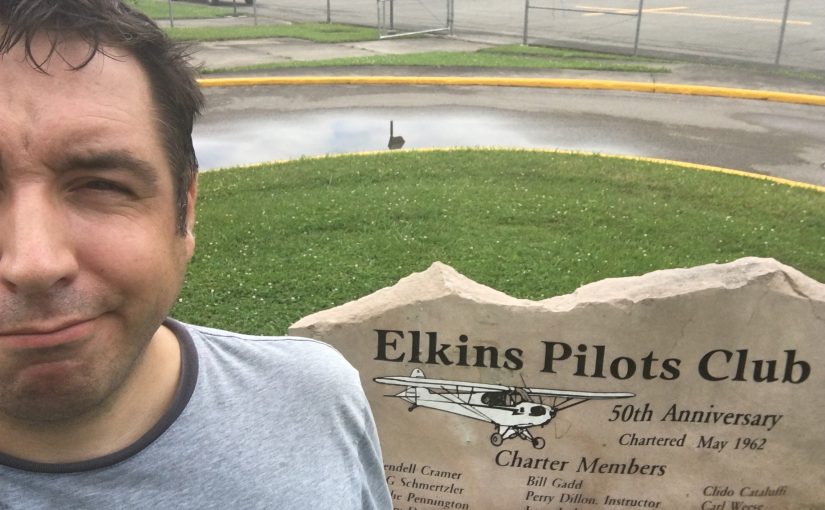 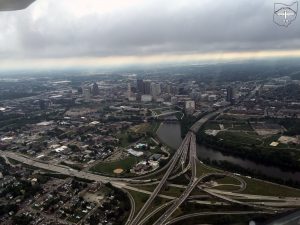 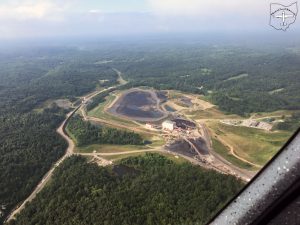 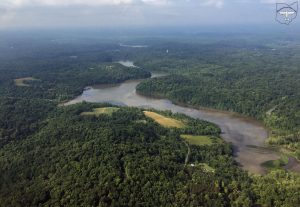 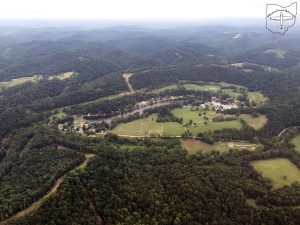 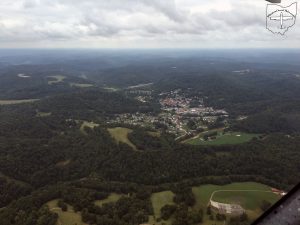 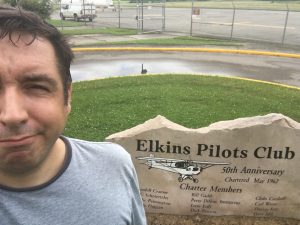