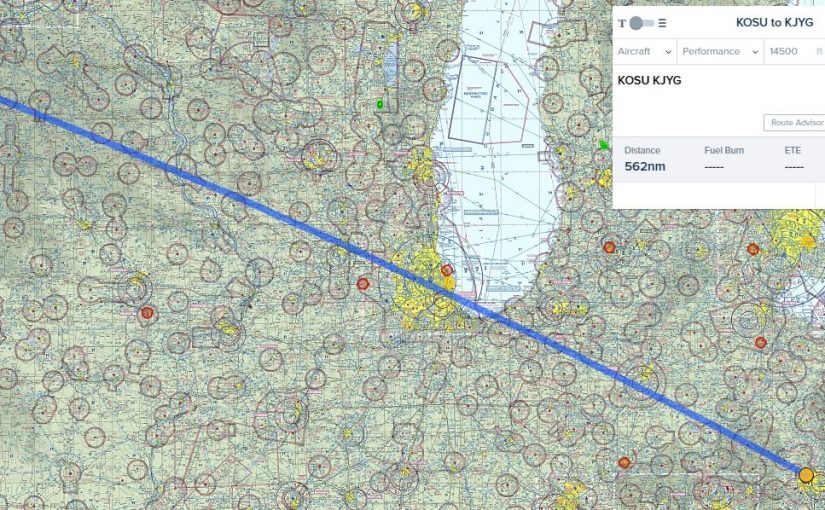 There’s a lot that goes into planning a long cross-country flight but the vast majority of the planning is really just contingency in case something goes awry. If everything goes smoothly, the reality of cross-country aviation is simply hopping in the plane, pointing it in the right direction, and when you need gas, pull into the nearest airport and fuel up. Not much different than driving a car down the highway except there’s less stuff to run into.

Anyway, my wife is on maternity leave and is using some of the time off to take the baby back to her home town for a week to let the grandparents dote on her and to introduce the baby to her great-grandmother who doesn’t travel as well as she used to. Four generations of women all together is a rare feat. My wife will be flying commercial.

I, without any maternity leave, will be flying up just for the weekend. Now here’s the thing about getting to rural town in southern Minnesota from Ohio: Flying commercial takes two hours to get to Minneapolis. Then you have to hike over to the car rental counter, deal with that nonsense, and then drive for another two and a half hours to get into town. Add in airport time like waiting at the gate, or waiting for baggage claim, shuttle to and from parking and you’re looking at six to seven hours of total travel time; or, I can fly a plane myself which I like to do anyway, and land 5 minutes outside of town in five and a half hours.

So the first thing I have to do is look at my route: It’s 560 nautical miles. That’s about five and a half hours of flight. I can carry about six hours of fuel. That cuts things a little tight, especially if there is a headwind on the day I travel. So I need to re-fuel somewhere along the way.

Next thing I see is that I’ll be going directly over Chicago. Since that airspace is some of the busiest in the world, it’s unlikely I’ll be cleared through so I’ll probably have to go around it anyway. Might as well use that diversion as a fuel stop. 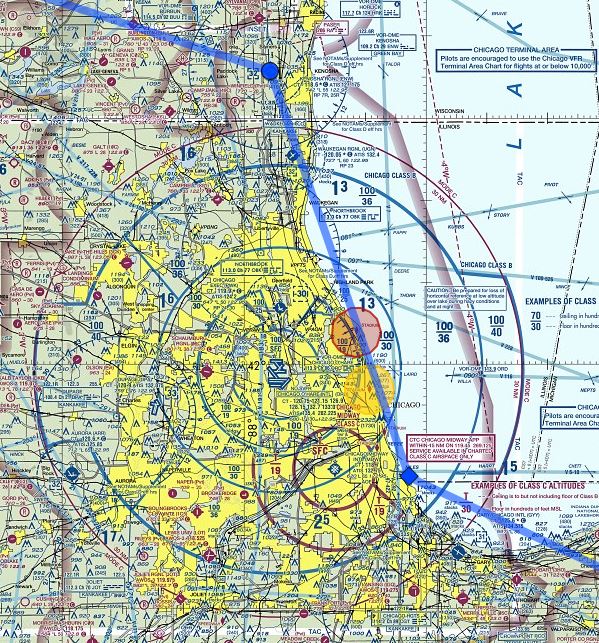 The class B airspace (blue rings) starts at 3,000 feet above sea level at its lowest point along my route, so as long as I stay under that, I can skirt along the Chicago coast and get some great pictures of the city. Once I get north of the more restrictive airspace, I’ll land at Kenosha Regional airport and re-fuel.

So that’s my intended route. It’s very possible that weather over the lake will make that plan impossible though so I’ll plan some back-up airports to the south I can use too.

Next, I’ll make sure that I have radio frequencies for all of my intended destinations written down. The plane has the information on its gps, and I have my phone as backup, but it’s always nice to have a hard copy just in case.

Since I’ll have a short stretch of flight over water, I’ll throw a life jacket in the passenger seat just in case.

That’s about all the planning I need to do besides choosing what snacks I want to bring and what podcast I might listen to.

All that’s left is to hope that the weather is good enough for the flight when the weekend comes around! Hopefully I’ll be posting some pictures of the Chicago skyline soon.