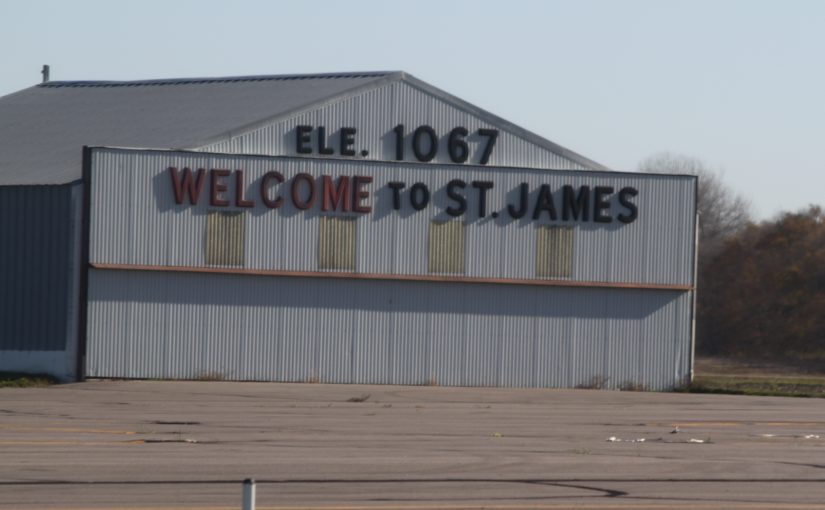 So 0 year-old daughter and wife went to wife’s Minnesota hometown of Saint James to visit parents and our daughter’s great-grandmother. Since my wife is on maternity leave and I was working that week, she left a few days earlier than I did and I caught up for the weekend. The weather forecasts looked good enough that I felt confident flying private rather than commercial.

Weather forecasts are bullsh*t. Columbus, sunny all day. I had to find a hole through THIS to even get going.

But, after a 2 hour delay, I found an opening worth going for and climbed through it to get over the top of the cloud layer. Unending clouds is just about what I saw for nearly an hour as I worked my way northwest.

My direct route crossed through Chicago airspace. Some of the busiest airspace in the world. Since I needed to re-fuel anyway, I stopped in Gary, Indiana and topped off the tanks before skirting Northwest along the coastline and under Chicago’s class-B airspace. This allowed a nice daytime shot of the Chicago Skyline:

Saw quite a few other planes in the area. Everyone staying below the Chicago airports’ control space.

Once north of Chicago I turned west again towards St. James. It wasn’t long before I crossed over Harper’s Ferry, Iowa and got a great shot of the Mississippi.

You might be thinking, is that THE Harper’s Ferry I read about in the history books? Nope. That one is in West Virginia. But if you want to know something really weird, here’s a piece of trivia you won’t find anywhere else:

Harper’s Ferry, IA (on the Mississippi) started out as Harpers Ferry (no apostrophe). The apostrophe was later added.

Harpers Ferry, WV (famous, no apostrophe) started out as Harper’s Ferry. The apostrophe was later removed.

Anyway, started to get a little closer to St. James and the sun also started to set.

And then just a short while later I was there with all the in-law family to greet me. It was one great welcoming.