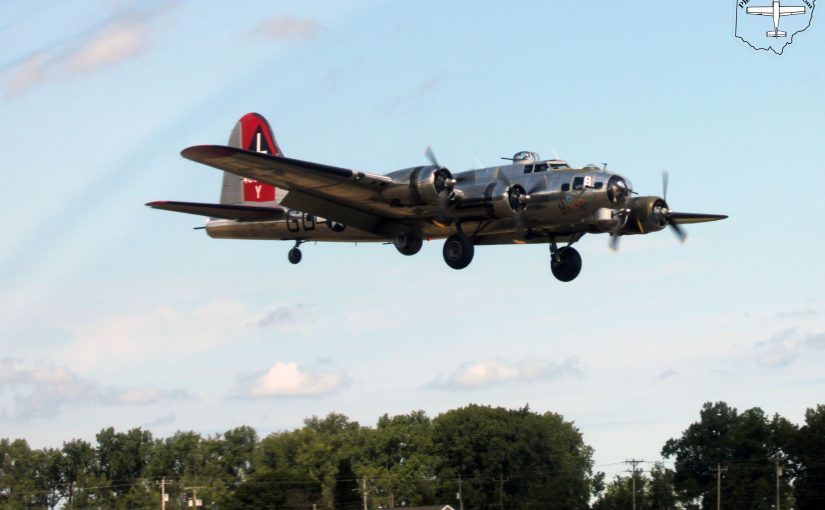 Today was a day I’ve been waiting for since the pilot’s license was barely in reach. I flew from KOSU to Port Clinton where I picked my dad up. Gave him a quick rundown of emergency procedures and off we went.

We were third in line for take-off in the busy weekend traffic but we were waiting on this B-17 Bomber to land, so it was worth it. Impressive!

When it was our turn to get in the air, some mildly turbulent air caught him off guard on take-off and I got an exclamation out of him. So far so good.

The plan was to land at each of the three Bass islands: North Bass, Middle Bass, and South Bass. Only Middle Bass allows touch and go landings, so we would land full-stop on North, touch and go Middle, then land at South Bass to grab lunch.

Heading north from KPCW, we passed the Catawba Island Club, tried to get a few snapshots for some family friends.

During the weeks leading up to this trip, I tried unsuccessfully to find a connection at the ultra-exclusive Rattlesnake island to give us an invite to land & lunch there. No luck. Best I can do is a couple pictures from the air.

Next up was the landing at North Bass Island (3X5). The runway runs almost north-south (01/19) and we were landing on runway 01. It’s also only 1,804 feet long and 60 feet wide. Not a lot of room for error in any plane, not even a little one like the light sport I was flying.

We stopped, someone was mowing the grass near the runway. We saw one car drive down the road that runs parallel to the runway. There isn’t a whole lot to do here if you don’t live here. Not even a restaurant. So, we hopped back in the plane, back-taxied and took off!

Next course of action was Middle Bass Island. The turbulence was starting to pick up as the afternoon wore on and my right-seat passenger was having trouble getting a steady shot. This is the best we got of Middle Bass on short final:

Here’s a better shot of the airport in general on Middle Bass as we flew towards North Bass earlier:

After a touch & go on Middle, we swung to the south for the very short hop over to South Bass. We got a good pass over the bay itself and it was as busy as you would expect on a beautiful summer Sunday.

Now I was hungry!

I reserved a golf cart earlier in the week, but unfortunately it turned out to be the slowest golf cart on the island. We got passed by a mother walking her baby in a stroller. Oh well, at least we had shade.

After lunch it was back to Port Clinton to drop off dad and fly myself home.